The Blue Ridge Parkway is gaining more information about wildlife thanks to three young women from Appalachian State University who are working as biological technicians this summer.

Chelsea Rath, Kaitlin Carnahan, and Valerie Bruchon travel along the 469 miles of the park to work on projects such as:

Examples of animals they work with are dragonflies, butterflies, birds, damselflies, bog turtles and even flying squirrels.

The Blue Ridge Parkway is a national park located in western North Carolina and Virginia that attracts around 17 million people a year. Although many people think it is just a scenic road, it provides many opportunities for recreation and understanding of the natural resources and cultural heritage of the southern Appalachian Mountains.

The Parkway's lead wildlife biologist Bob Cherry, their supervisor, says that the program is an excellent way for students to get a hands-on opportunity with animals that most students don't get.

"I'm very happy with the quality of the students," said Cherry. "It's nice having people dedicated to the program. We don't have to rely so much on volunteers."

Neva Specht, Associate dean in the College of Arts and Sciences, is the liaison between the university and the Blue Ridge Parkway. She says the university created her position in 2006 in order to make communication between the organizations smoother and to fulfill the requests of the Parkway for qualified student workers and faculty expertise on specific projects.

"They get to try out a career possibility," said Specht when asked how the students were benefiting from the program. "They may like it or they may not like it but it's a chance for them to take what they learned in the classroom and apply it to a real-life setting and see if that's the direction they want to go." 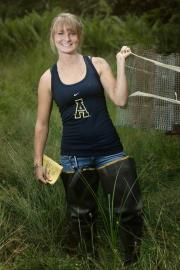 "It's nice to go to work and think I'm actually making a difference," said Carnahan, who graduated from Appalachian in May with a degree in Geography.

She started her internship with the Parkway soon after graduating and will continue through the summer. She found out about the opportunity through contacts in the Department of Geography. She is responsible for managing bat surveys and leads weekly workshops for her coworkers to teach them how to use geographic information system (GIS) software to formulate maps on a computer. She plans to use the skills and connections she has made while working in the park service to work with government service and wildlife. 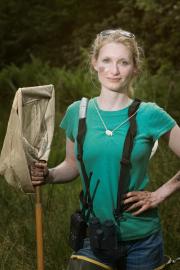 Bruchon, who is hired through the Department of the Interior, started working with the Parkway last summer mapping wildfires on GIS software. In May, she came back under the title biological technician and, along with various wildlife projects, is responsible for creating educational materials for interpretation rangers, who then take that information and educate school children and the general public.

"We are able to work independently and take on a decent amount of responsibilities," said Bruchon. "We are not sitting at a desk doing one thing. It's a huge variety of different things that we get to do, which I love."

She got the position last summer after seeking more information from Bob Cherry, lead wildlife biologist of the Blue Ridge Parkway, who was a guest speaker in a class she had taken. She is currently a biology major who plans to graduate next spring and go on to get involved with climate change research and possibly act as a liaison between climatologists and the public.

Rath, who began her internship with the Parkway last summer, took time off from school this past spring semester to focus specifically on her job with the park service. During the winter, she got to work with Carolina Northern Flying squirrels, which are an endangered species. She set up flying squirrel boxes in trees and got the chance to measure, weigh, and mark them with a tag so they could be found again. She says that being able to apply for the internship through the university allows students more opportunities to gain experience, which is needed to succeed in the field. She found out about the opportunity through a personal connection in Asheville. During second summer session, she plans to leave her internship position to return to school to complete her degree.

"Outside of the science and biology, it has definitely helped me to work with people," said Rath. "There is a lot of teamwork and communication."