Appalachian welcomes Sustained Dialogue as catalyst for change on campus

“Our country is more angrily and deeply divided than at any point in my lifetime. Too many people have lost the capacity to talk respectfully or relate constructively to one another. Sustained Dialogue transforms relationships to design change. That’s why the message of Sustained Dialogue is seared on my soul.” – the late Harold Saunders, founder of the Sustained Dialogue Institute

Sustained Dialogue Institute is an international program that helps people transform negative relationships and design change processes around the world.

Saunders, who died in March, was an American diplomat involved in a number of peace processes in the Middle East in the 1970s onward. He was instrumental in the famous Camp David Accords between Israel and its neighbors.

The Sustained Dialogue (SD) process has been used around the world for productive conversation to solve deep-rooted issues. In 1999, a group of students at Princeton University began using the process to improve race relations on campus. Now, Sustained Dialogue has spread to 46 college campuses worldwide, including Appalachian State University.

Unlike discussion or debate, dialogue is about listening deeply enough to others to be changed by what one learns, according to the Sustained Dialogue Institute. Appalachian administrators wanted to use this approach to guide conversations about diversity, an important initiative on campus.

Jeff Cathey, director of student programs at Appalachian, was the driving force that brought Sustained Dialogue to the university. Initial training of moderators began in Fall 2015.

“Our goal was for members of our community to learn to have these conversations about diversity that can be so difficult, and to have them with more respect and in an inclusive way,” Cathey said.

“I think that so commonly when a polarizing conversation comes up, it can be the nature of our society to pick sides, and if people disagree, then the other side is wrong. The dialogue model is much more from a basis of ‘Okay, perhaps someone has a different perspective than I do. Tell me about it,’ and wanting to listen deeply to understand others,” he said.

Sustained Dialogue develops relationships and effects change through a five-stage process. The first step: the “who,” or deciding to engage. Participants are placed into dialogue groups that meet weekly to discuss one topic out of “The Big 8,” that is, socioeconomic status/class, sex and gender, age, race and color, sexual orientation, religion, ethnicity and ability. People tend to line up along shared characteristics. SD helps cross those lines and develop relationships built on conversation and trust.

Pooja Adial, a junior at Appalachian, chose to participate in Sustained Dialogue after hearing about the opportunity from a mentor. As required, she attended a weekend-long training session and committed to being a group moderator.

“I wanted to be a moderator for race because it’s part of my identity. There isn’t a lot of conversation about race on campus and people can be misinformed. I want to have good conversations with different people and guide everyone to where we can learn from each other,” Adial said.

The second stage in the five-stage process is the “what,” or mapping and naming. During this early stage, trust is built among participants. Personal experiences are shared and problems are identified so each group can agree to focus attention on which conversations.

“In my group, we focus on gender. However, my co-moderator and I believe in intersectionality (the understanding that our experiences change depending on how our other identities interact with each other). For that reason, we center the conversation on gender, but we dive into how our other ‘Big 8’ identities affect our perceptions, understandings and experiences with gender,” said Tory Walters, a senior at Appalachian.

After relationships are built, participants move on to the third stage in the process, the “why,” or probing problems and relationships. During this stage, problems are identified and solutions are discussed.

The next-to-last stage in the process is the “how,” in which participants design a plan to change potentially negative relationships and engage others.

The final stage in the Sustained Dialogue process is the “now,” or initiating individual and collective action. Participants are tasked with involving others outside the dialogue group and spreading awareness of Sustained Dialogue and the importance of diversity.

“I think it involves being an ambassador for the program itself, spreading the word and encouraging others to get involved,” Cathey said.

Adial said she has definitely taken what she’s learned to the rest of the Appalachian community. As a resident assistant on campus, she implements Sustained Dialogue ideals into programming for her residents. She also participated in INTERSECT, a three-day social justice retreat that helps empower students to take positive action on campus.

As for Walters, she recommends everyone join Sustained Dialogue.

“Even if you’re not a moderator it will have such a large impact on how you view yourself and others. My SD group meets on Thursdays at 5 p.m. and it’s the best part of my week. I’ve gained so much from this program and I know that it’s going to continue to improve my skills as a leader, communicator and professional,” Walters said. 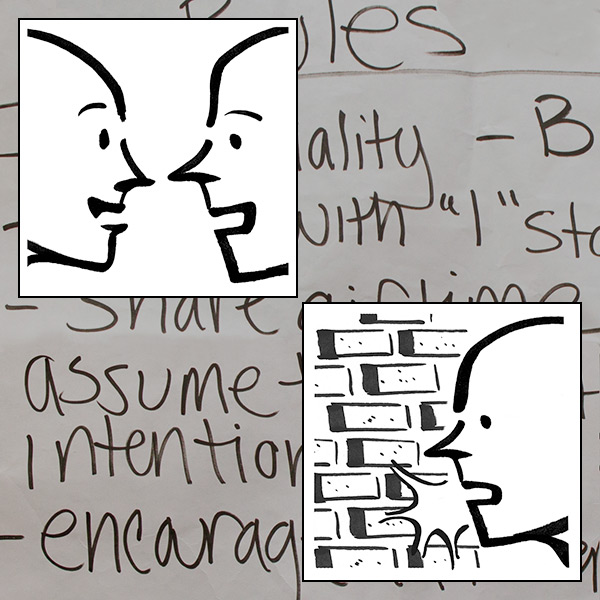 Cathey said feedback from this spring’s sessions has been positive. He said administrators are taking steps to continue Sustained Dialogue next semester and beyond.

“We’ve attracted a group of participants who are really interested in learning from others’ perspectives, participants who seem interested in acknowledging their own points of ignorance and getting into spaces where they feel safe. I feel like we’re in a really good place. I think we’re off to a good beginning, hopefully something that we will maintain for several years,” he said.

“Interested students can go to our Sustained Dialogue page through AppSync for more information and to register for the training. We will then recruit participants when the fall semester begins,” Cathey said.