How a student moved from activism to action, and changed Appalachian's business practices
August 5, 2016
Tweet

Alaina Storch, a third-year global studies major at Appalachian State University, is on a campaign against “fast fashion” – an industry term for clothing designs that move quickly from runway to retail in order to stay ahead of the hottest new looks.

According to Storch, the means to get a product to the selling floor as fast as possible is underpaid, under-represented labor, often by children in developing countries. Her discovery of this practice led her to take action, and call upon Appalachian administrators to change the university’s purchasing practices of logoed apparel.

Her activism – which began with research, then a letter-writing campaign and finally a presentation of her findings to Provost Darrell Kruger – resulted in the university’s affiliation with the Workers Rights Consortium (WRC), a group that collaborates with workers, non-governmental organizations and other colleges and universities to improve the conditions of workers producing licensed collegiate apparel.

Now that Appalachian is affiliated with the WRC, Storch said, the university will receive reports from WRC that monitor the conditions and pay at the plants that are making logoed clothing. “We need to consider the people who make our clothing as an extension of App State,” Storch said. 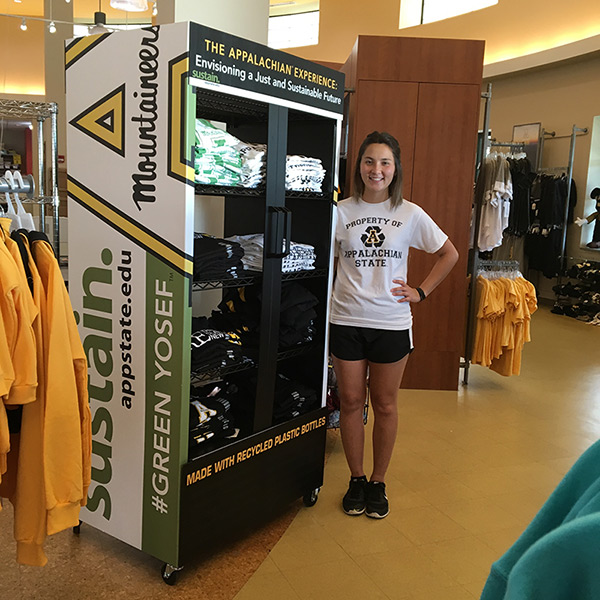 T-shirts made from water bottles, at your Appalachian State University Bookstore now!

Appalachian State University Bookstore offers sustainable fashion lines and a variety of merchandise made from recyclables.

Storch, originally from Greensboro, said she was keyed into fashion as young as age 14 but over time became aware of poor labor practices in the industry. “I didn’t want to work for an industry that had those values,” she said. “I thought I was alone, but started to do some research and saw there were tons of organizations thinking my way. I reached out to United Students Against Sweatshops (USAS) about a year ago.”

Last fall she approached her anthropology professor, Dr. Gregory Reck, to ask for help finding funds to bring a USAS workers’ speaker to campus. With his assistance, Storch raised the funds and in March a representative from USAS, accompanied by a sweatshop worker from Thailand, came to campus and spoke before a crowd of well over 200 students. This led to a series of student meetings organized by Storch, the letter campaign and ultimately two meetings with Kruger and university General Counsel Dayton Cole, in which, Kruger said, she presented a compelling case to authorize an affiliation with the WRC.

In her letter Storch stated, “Our university has always prided itself in being a leader in social responsibility. As the very first line of our mission statement reads, ‘Appalachian State University prepares students to lead purposeful lives as engaged global citizens who understand their responsibilities in creating a sustainable future for all.’ If we truly believe that, we need to take urgent action to ensure our university-logoed apparel is being made under conditions where workers rights are upheld.”

Chancellor Sheri N. Everts agreed and authorized the WRC affiliation in March. “This decision is in perfect alignment with Appalachian’s commitment to deep sustainability which requires us to consider our actions in relationship to our environment, economics and the equity concerns of our local and global neighbors,” she said in an announcement about the affiliation.

The WRC has the support of more than 175 colleges and universities in the U.S. and Canada. On behalf of affiliates, the WRC investigates working conditions at factories producing clothing and other products bearing university names and logos, and issues public reports of the findings.

Colleges and universities affiliated with the WRC have a manufacturing Code of Conduct that addresses the following issues:

Appalachian has adopted a manufacturing Code of Conduct that is an element of all contracts with its licensees.

Appalachian’s affiliation with the WRC means the university will require full public disclosure of factory locations and will notify its licensees that this information must be provided within three months. The university has committed to require full and regularly updated public disclosure of factory locations, including those of contractors and subcontractors, and has designated Associate Athletics Director Brittney Whiteside as the university’s primary contact for WRC matters.

Storch is looking forward to being part of a solution that will put any brands out of compliance “on notice to either remediate the problems or lose the contracts with our university.”

While it is not always clear how to take action that will impact the lives of workers who might live continents away, Storch’s research and willingness to present it in person is what led to her effectiveness, Kruger said. Storch recommends people who want to make a difference should start with awareness. “You can’t be motivated to change if you are not informed,” she said. “You won’t consume less unless you know what’s going on. There have been numerous factory fires, factory collapses; workers are dying for the sake of our garments. We have to ask ourselves, ‘Is it worth someone’s life for me to be wearing this cute top?’”

She also recommends living intentionally. “We can mend our clothing,” she said, “buy less, shop thrift stores. We live in a culture of consumerism. For fun we go out shopping. It’s an American pastime. We can change that pastime.”

After graduation, Storch hopes to do field work for an organization like the WRC. “I love experiential learning. I want to be with people. I love human-to-human interaction. I want to be as close to that [kind of] work as possible. I want to hear the stories and write about them.”