Students learn best in diverse educational environments. Central to the depth and quality of intellectual life at Appalachian is a diverse faculty. The Faculty Fellows Program recruits and retains faculty members with life experiences unique to Appalachian's underrepresented student and faculty populations.

Their varied origins and perspectives enrich all of campus life while preparing students for active, global citizenship.

The Appalachian State University Faculty Fellows as of November 2007 are...

E. Ike Udogu is a professor in the Department of Political Science and Criminal Justice. He earned his B.A. in political science from Appalachian State University and his M.A. and Ph.D. from Southern Illinois University at Carbondale.

Since coming to Appalachian, he has published several books, book chapters, book reviews and articles. He has also co-authored works with graduate students.

Udogu is the recipient of several athletics and scholarly awards including NCAA All-American soccer player; inductee, Appalachian State University Hall of Fame; Who's Who in American Education; National Endowment for the Humanities; and 2000 Outstanding Scholars of the 21st Century Award.

He served as president of the Association of Third World Studies Inc.

Calvin L. Hall is an assistant professor in the Department of Communication, where he has taught since 2004. He teaches courses in introductory journalism, feature writing and editing, and layout and design. His research interests include the function of mass communication in society in the areas of race, class, gender and culture, as well as history, literary journalism and scholastic journalism.

Hall earned a Ph.D. in mass communication from UNC Chapel Hill and holds B.A. and M.A. degrees in English (creative writing concentration) from N.C. State University. He taught English and journalism at Asheville High School, where he was also the student newspaper adviser. He was among advisers featured in the book Death by Cheeseburger: High School Journalism in the 1990s and Beyond, published by the Freedom Forum in Washington, D.C.

Among his professional credits, Hall was one of 20 journalism professors selected to work at a daily newspaper as a fellow of the Institute for Journalism Excellence, an intensive program sponsored by the American Society of Newspaper Editors and the John S. and James L. Knight Foundation. He serves on the board of directors of the North Carolina Humanities Council and is a member of the Association for the Study of African American Life and History (ASAALH). 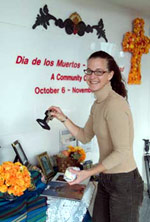 Rachel S. Shinnar became a Faculty Fellow and an assistant professor in the Walker College of Business's Department of Management in 2004. She holds Ph.D. and M.S. degrees in hotel administration from the University of Nevada, Las Vegas and a bachelor's degree in French literature and general humanities from the Tel Aviv University in Tel Aviv, Israel.

Her research interests focus on cross-cultural issues and the careers and work-life experiences of Hispanic immigrants, including entrepreneurship. As a Faculty Fellow, Shinnar has been actively involved with the local Hispanic community in the Boone area as an English as a Second Language tutor and a volunteer healthcare interpreter.

She is especially proud of coordinating the "Day of the Dead" exhibit over the last three years, engaging Appalachian students and faculty alongside Hispanic and other community members in putting together this event.

Chishimba Mowa is a native of Zambia, located in Southern Africa. He obtained his veterinary degree from the University of Zambia and later got his master of veterinary medicine from Glasgow University in Scotland and his Ph.D. from Hokkaido University in Japan. He then did a postdoctoral fellowship in the department of neurobiology at the Northeastern Ohio Universities College of Medicine, where he was later appointed as a research instructor. Mowa joined Appalachian's Department of Biology as an assistant professor and Faculty Fellow in 2005.

Mowa's research interests involve male and female reproduction, specifically the role of estrogen (plus plant estrogens) in the development of male external genitalia, and mechanisms that underlie the birth process. At Appalachian, he has taught endocrinology and physiology. He has numerous scientific publications to his credit, including more than 20 peer review manuscripts. He was one of 20 recipients of a national scholarship to attend a six week-intensive, summer laboratory and lecture course at the Marine Biological Laboratory (MBL) in Massachusetts.

On campus, he is an advisor for the African Student Association.

Xiaorong Shao works as a cataloger and reference librarian in Appalachian's Belk Library and Information Commons. She earned an M.L.S. degree in information and library science from Clarion University of Pennsylvania. Shao obtained a master's degree from the University of Reading, UK, and a doctorate from Pennsylvania State University in agricultural education with a concentration in curriculum and instruction. Her bachelor's degree, received from Northwest Agricultural University in China, is in soil science and chemistry.

Shao came to Appalachian as a Faculty Fellow in 2006. Her research and teaching interests are curriculum and instruction, and international and diversity education. She is also interested in teaching statistics and research methods in the social and behavioral sciences. Currently, she serves on several committees including the Appalachian State University International Education Council and the Library Diversity Committee.

Department of Theatre and Dance

As a scholar and teacher, Szeto has continually integrated interdisciplinary perspectives and methodologies in her work. She has published articles in China, Taiwan and the United States related to performance studies as well as gender, ethnic, postcolonial and transnational theories.

At Appalachian, Szeto and her colleagues are developing a moving image minor program in the Department of Theatre and Dance. This program will emphasize the connections between technology and live performance.

As a Faculty Fellow, Szeto is excited to direct an English translation of Stan Lai's Pining... in Peach Blossom Land in Valborg Theatre in April 2008. The play is a landmark piece for contemporary Chinese theatre. 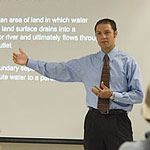 Ryan Emanuel is a Lumbee Indian from North Carolina who earned a B.S. in geology from Duke University before relocating to Virginia for several years for work and graduate study. He received a M.S. and Ph.D. in environmental sciences from the University of Virginia, where he studied carbon and water cycles in Virginia and Montana.

Prior to joining Appalachian's Department of Geology in fall 2007, Emanuel worked as a postdoctoral research associate at Duke's Center on Global Change, extracting information on topography and vegetation from high-resolution laser altimetry (lidar) data collected over North Carolina.

His research in the areas of hydrology and land-atmosphere interaction has shown that agricultural fields continue to act as significant sources of atmospheric carbon dioxide even after they have been abandoned, and that terrestrial carbon and water fluxes are intimately linked to soil moisture and water stress across a broad range of terrestrial environments. His work has broad implications for the availability of groundwater and surface water resources, and how these resources may vary in response to climate change.

Nina Sun Eidsheim joined the Faculty Fellows and the Hayes School of Music in fall 2007. She holds a M.F.A. in vocal performance from the California Institute of the Arts and will soon receive a Ph.D. in critical studies and experimental practices from the University of California, San Diego. Born in South Korea, adopted to Norway, and residing and working in the Appalachian Mountains, Eidsheim is proud to be a citizen of the world. In addition to English and German, she speaks Norwegian and the other Scandinavian languages. However, the accomplishment she is most proud of is the establishment of many relationships with performers, musicians, composers and thinkers over the years.

Her research focuses on the examination of cultural, historical and social contingent interpretations of the meaning of the timbre, or simply the sound, of the human singing voice in both classical and popular music. She is also dedicated to curriculum development and mentoring. In spring 2008, two Appalachian students will use fellowships funded by National Geographic to teach Eidsheim's Mapping the Beat, a geography-through-music curriculum.