Professor dispels myths and misinformation of Islam and the Arab world
November 10, 2008
Tweet 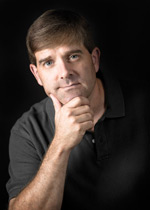 As a child, Curtis Ryan was intrigued with the Middle East and Arabic culture. Stories and movies about Ali Baba and the Forty Thieves, Sinbad the Sailor, Aladdin's Lamp fed his fascination. "Things that I now think of as horribly stereotypical of the region are, oddly enough, probably the reason I got involved in this research area," said Ryan, an associate professor in the Department of Government & Justice Studies whose research focuses on Middle Eastern culture and politics.

Ryan pursued his passion by studying Arabic culture and language in college. He also enrolled in a language program in the Kingdom of Jordan. "Within 24 hours of being in the country I was hooked," he said of the experience. "Since then, I go back as often as I can, and I continue to work on my language skills and my research."

Ryan has written numerous articles on topics associated with Arabic culture, and two books: "Jordan in Transition: From Hussein to Abdullah" (2002) and "Shifting Arab Alliances," which should be published within a year. In summer 2007, he presented research at a global NATO conference in Istanbul, Turkey. In the following interview, Ryan dispels some of the myths surrounding this ancient culture and sheds light on a region - and a people - at the center of so much turmoil and strife in today's world.

Q: What do you most hope to accomplish with this work, and how do you plan to do it?

A: From all accounts in the media, the public is getting a skewed and inaccurate version of the Middle East and Arab culture. For example, I was watching the news the other day and they were discussing an author who has written a book proving that Islam is an inherently violent religion. This is nonsense. Clearly there are extreme Islamists who are very violent. They are, essentially, aberrations of the religion, just as Rev. Jim Jones was an aberration of the Christian religion. But, we never talk about Jones being representative of Christianity. He wasn't. And, neither is Osama bin Laden representative of Islam. Because of the 9/11 bombings and the war in Iraq, a fifth of the world's population is being systematically misrepresented and misunderstood.

My personal experience has been that Arab and Islamic culture is the most hospitable culture on earth. The people are uncommonly kind, and they are being depicted overall as violent extremists. These are acts of disinformation, and they need to be countered. Because my expertise is focused in this region and on this culture, I have an opportunity to provide clarification in this area. I came to Appalachian just as the Iraq war was beginning, and was immediately asked to be on panels and to do public talks. I have taken these occasions to do some myth busting on the topic of the Middle East and Arab culture. I think this is probably the single most important service I provide to my students and the local community.

Q: What myths can you dispel for us here?

A: Contrary to what most people think, and what militant groups purport, Islam does not justify terrorism. Murder and coercion are not permitted in matters of religion, and neither is suicide. So, if you hijack a plane, kill people and commit suicide in the name of Islam, you have committed multiple sins. Militant jihadists have a dim understanding of their own religion. This is true worldwide of ultra-militant and violent religious groups, whether they're Jewish, Hindu, Christian or Muslim. A militant version of any religion tends to be very narrow. Also, most westerners don't realize how similar Islam is to Christianity and Judaism, that each of these religions has their roots in Abrahamic tradition and recognizes Abraham as a major prophet. Islam accepts the entire Judeo-Christian line of prophets, but sees Muhammad as the final prophet. Muslims also revere Jesus as a great prophet, but as a great Muslim prophet. Another misconception about Arab countries is that they are more alike than not. They do have a common heritage and a common religion, but beyond that each country has evolved differently, with different political systems.

Q: Would you give a brief overview of Muslim culture and the Arab state?

A: The earliest civilizations we know of were born in the Middle East, as were all the major monotheistic religions: Christianity, Judaism, Islam. The Arab world was divided up by Europeans through colonization in the 19th century, and independence left behind a conglomeration of independent nations. Today's Arab world consists of about 20 different countries. The Arab world constitutes about 350 million people, and the Muslim population is over one billion, making Islam the second-largest religion in the world, after Christianity.

As difficult as it is to understand Middle Eastern politics right now, this one paradox is critical to understanding the region as a whole: In addition to being home to the world's great religions and oldest civilizations, it is also home to some of the world's newest countries, countries that got their borders during and after World War I, and became independent after World War II, typically in the 1960s. If we acknowledge the Middle East as being composed of newly independent nations, it shouldn't surprise us that they don't get along. It would be surprising if they did. It makes sense that nobody likes borders imposed on them, that they struggle over control of resources, especially when oil is involved.

Q: Has your work included addressing the situation in Iraq and the war against terrorism?

A: Originally I was not interested in getting into issues of terrorism, but given what's happened since 2001, that has changed. I've become very concerned about how things are going both in Iraq and the Middle East in general. Those of us who specialize in this field accurately predicted war with Iraq would radically increase terrorism not just in the region, but worldwide. As horrible as Saddam Hussein was, he was a militant secularist. He opposed all religious forms of political activism, and most importantly was an arch-enemy of Islamic fundamentalists. They could never operate in Iraq under his regime, since he persecuted them. But, they certainly operate there now. The presence of a foreign occupying force enabled the jihadists to enter the country. We've created a haven for terrorists when we were trying to do the opposite.

From the beginning of this conflict, many of the problems encountered have been due to a lack of understanding of Arab and Islamic culture. The Middle Eastern region is complex, both with regard to politics and ethnic alliances. Once I complete my second book, "Shifting Arab Alliances," I hope to begin a book that will address these complexities in a voice that is accessible to general audiences. I'm thinking of calling it "Shades of Green." Green is the traditional color of Islam, and there are many shades included in the spectrum. I think a book that addresses Islamic politics and how Islam works worldwide could be a great benefit at this time. There truly are so many different shades of green.

Curtis Ryan can be reached at ryanc@appstate.edu.