BOONE—Appalachian State University professor of creative writing and poet, novelist and essayist Joseph Bathanti was awarded the North Carolina Award for Literature on Sept. 22. The North Carolina Award is the state’s highest civilian honor. Gov. Pat McCrory presented the award to Bathanti and six other recipients at a ceremony at the Raleigh Marriott City Center.

“This distinction means everything,” he said, “since at its heart is the dazzling and varied literary community comprised of every single writer across the state.”

Bathanti served as North Carolina’s poet laureate from 2012-14. The winner of numerous literary awards, he has written 10 volumes of poetry, three novels, a short story collection and two books of nonfiction. He teaches creative writing at Appalachian and is writer-in-residence for the university’s Watauga Residential College.

A native of Pittsburgh, Pennsylvania, Bathanti describes Pittsburgh as “my beloved home town, but North Carolina is my beloved home state.” He writes about both, his work often referencing his working-class background and paying homage to his parents, who pushed and inspired him to become a college graduate and eventually a college professor.

Bathanti moved to North Carolina in 1976 as a member of the Volunteers in Service to America (VISTA) anti-poverty program, and began what would become a multi-decade endeavor teaching and working on literature projects with correctional facility inmates. He credits this work with teaching him the significance of telling one’s own personal story, and he has facilitated numerous workshops and writing projects for military veterans and their families managing the aftereffects of combat and trauma related to military service. He was chair of the N.C. Writers’ Network Prison project from 1989-94 and earlier this year was named the Charles George VA Medical Center Writer-in-Residence, a program in the Veterans Health Administration in Asheville funded by the North Carolina Arts Council and the North Carolina Humanities Council.

“Poetry and the stories that drive them save lives,” said Bathanti. “I really believe that. In the words of the great American poet William Carlos Williams: ‘It is difficult / to get the news from poems / yet men die every day / for lack / of what is found / there.’”

Additionally, he has earned a nomination for the 1996 National Book Award; the distinction of being named the Gilbert-Chappell Distinguished Poet for the Western Region for the North Carolina Poetry Society for 2011-12; literature fellowships from the North Carolina Arts Council; and a fellowship from the Witter Bynner Foundation for Poetry. In 2014, he was named the first scholar-in-residence at the Senator John Heinz History Center in Pittsburgh, and he is a mentor for the creative writing residency at Carlow University, also in Pittsburgh.

Bathanti holds a B.A. and an M.A. in English literature from the University of Pittsburgh, and an M.F.A. in creative writing from Warren Wilson College. He resides in Vilas with his wife, Joan, and two children. 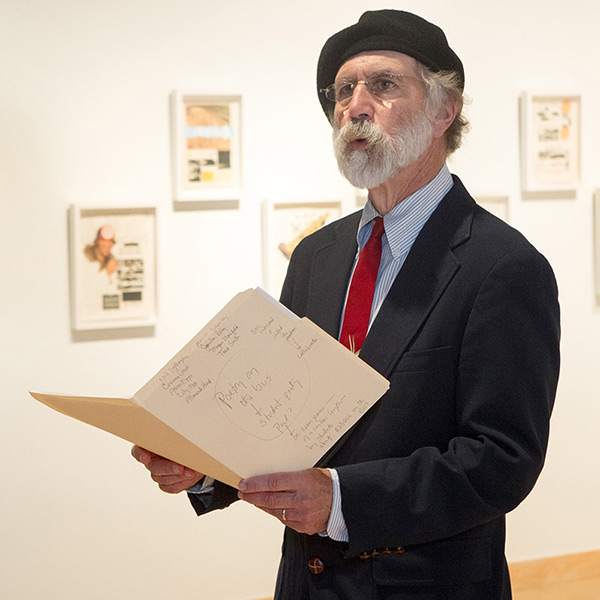 A reading of ‘Shouldering It’

Professor Joseph Bathanti, Department of English, former North Carolina poet laureate: Good afternoon. The poem that follows is called “Shouldering It” and it’s for our parents and grandparents, ancestors, family and friends who fed us dreams and sustained them and worked so unfathomably hard so someday we might embody those dreams. And for you, my esteemed fellow faculty members and teachers everywhere, period, who through your steadfast and dedicated toil, remain the chief agents of those dreams.

The summer I worked construction,
it was Whitman –
not a bricklayer,
but a common laborer like I,

a manovale –
who told me to stay in school,
that once I hit his age,
I’d rue on my shoulder the hod

the next year at Tuskegee.
But we dropped Little Boy and Fat Man
on Hiroshima and Nagasaki.
War ended and Whit

at a Day Care across the river.
They got everywhere by jitney and trolley.
He listened to WAMO, the black station,
during lunch on his transistor:

Ahmad Jamal and Sweet Pea Strayhorn.
All that mattered, he swore, was family,
one buck more than you could spend,
and a decent pair of shoes.

I fathomed his life through books:
Tolstoy’s peasants,
colliers in Sons and Lovers.
I romanticized my toil in ways only a boy can:

men’s work in the sun and dirt, bare-chested.
But after the first day, I knew
I wasn’t worth a damn.
Whit gave me gloves – he wore none –

to baby my soft hands.
He taught me to drink water.
One day, I referred to sumac
hovering the scaffold as foliage

and the whole site cracked up.
Whit was right.
I was merely passing through,
a college kid on my way out of Pittsburgh,

out of steel – where exactly I didn’t know.
I’d learned in class that destination
is mere allusion, a construct
mired between Marx and Freud.

The only thing I knew for certain
was what I couldn’t stomach –
and that was most everything.
Each working day, I prayed for a rain-out,

that I be spared, to read of the fellaheen,
the proles, my ancestors packed in steerage
across the shivering Atlantic,
their heads bloodied for a pittance

so someday I’d be paid to study them.
The men I worked with preferred suffering
to losing eight hours pay to weather.
This was no Union shop, no OSHA, no hardhat,

just an hourly wage; and your name, please God,
on the list every morning when you punched in,
thermos and lunch bucket, at 6:30.
They were making ends meet:

not two nickels to rub together;
not a pot to piss in;
a crust of bread was no metaphor.
They stood witness to the value of a dollar,

Faulkner’s “old thrill and the old despair
of a penny more or less.”
That summer, Whitman was 47 –
16 years younger than I am now –

his hair the color of fresh mortar;
eyes wet gray too, seared
with what could have only been love –
I had known love by then –

but something even more devastating.
Everyone seemed old then – and I wonder
what I might have looked like,
if they even noticed my shambling

among them, on my shoulder
the cumbrous hod, quaking
with my longing and their grief;
genuflecting to the bricklayers,

kneeling on calloused knees,
smoking cigarettes, as they summoned me
to dump the mud on their mortarboards
as they troweled the next course,

heaved them to his shoulders
and made for the sky:
three stories, to the deadly gables,
on shaky two-by-twelves –

sluice from the dripping hods
striped his naked back –
into the sun, the calling crows,
the hushed thrall of ether.

About the North Carolina Awards

Appalachian State University, in North Carolina’s Blue Ridge Mountains, prepares students to lead purposeful lives as global citizens who understand and engage their responsibilities in creating a sustainable future for all. The transformational Appalachian experience promotes a spirit of inclusion that brings people together in inspiring ways to acquire and create knowledge, to grow holistically, to act with passion and determination, and embrace diversity and difference. As one of 17 campuses in the University of North Carolina system, Appalachian enrolls about 18,000 students, has a low faculty-to-student ratio and offers more than 150 undergraduate and graduate majors.