Appalachian’s Sarah Carmichael to be inducted into The Explorers Club

The cave was cool and damp, and its absolute, eerie darkness was broken only by a headlamp. Cold water slowly trickled down the tan-stained rock, and a drop landed on her cheek. As she wiped it away, a smear of orange-red mud remained. Handprints of mud stained her clothing. Bent over, she examined loose rock near the cave floor—and then she saw it. A dark coating on a milky-colored, coarse stone. More about that later.

Such is the life of a cave explorer. Yet exploration is not limited to caves for Dr. Sarah Carmichael, associate professor in Appalachian’s Department of Geology. She has also descended to the ocean floor in Alvin, a research submersible in order to study hydrothermal vents—and was almost caught in a dangerous underwater avalanche while doing so.

As a geochemist, Carmichael has studied evidence of mass extinctions in western China and western Mongolia. These places were only islands in an ocean at the time of the extinctions, yet they offer ancient ocean chemical signatures, which provide clues about underlying causes of the massive loss of life. The research is fascinating, and there are practical reasons for it. “As the mass extinctions were likely due to rapid changes in climate, our work can be used to make predictions about rapidly changing climates in the future due to anthropogenic climate change,” said Carmichael. “Furthermore,” she continued, “this series of mass extinctions is the source of much of the organic carbon preserved both as shale gas and conventional oil deposits around the globe, and our research on how these deposits formed may have broad geopolitical ramifications if it’s found that these understudied areas could host significant reserves of natural gas.”

Carmichael’s research has also taken her to Tanzania, which is situated just below the equator in eastern Africa, where her expertise in minerology has been applied to an understanding of the cementation associated with more than 400 human footprints left in ash from a volcanic eruption millennia ago. Speaking of this experience, Carmichael said, “Fieldwork for this project involved sharing my field site with zebras, baboons, wildebeests, giraffes and ostriches on the flanks of the active Oldonyo Lengai volcano.”

Carmichael does not consider herself “an extreme sports person, or much of an adventurer.” But when it comes to science, she said, “I’m willing to do pretty much whatever I need to do to get the samples and the data.” 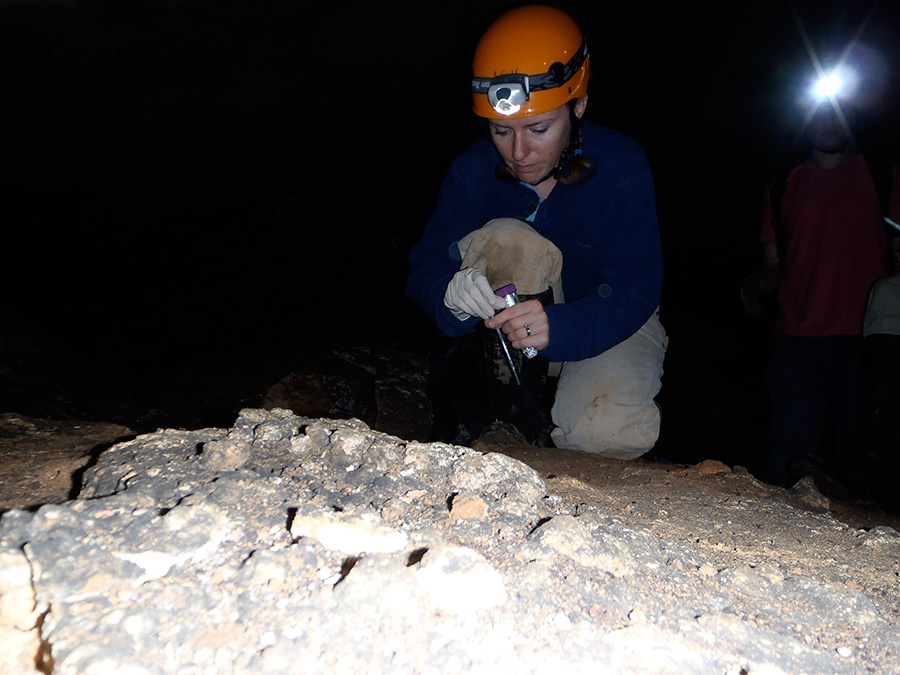 Carmichael’s research in challenging environments across the globe has resulted in her being named as a Fellow in a most prestigious society, The Explorers Club, which is headquartered in New York City. Fellows in this organization have included such distinguished persons as astronauts John Glenn, Neil Armstrong and Sally Ride, polar explorers and mountaineers Robert Peary, Roald Amundsen, Sir Edmund Hillary and Tenzing Norgay, ocean explorers Don Walsh, Thor Heyerdahl, Sylvia Earle and Bob Ballard, and anthropologists Jane Goodall, Lewis and Richard Leaky, Donald Johanson and Dian Fossey. Carmichael will be received as a Fellow of The Explorers Club on March 24 in New York City.

According to The Explorers Club web site, the organization was founded in May 1904 as “an organization to unite explorers in the bonds of good fellowship and to promote the work of exploration by every means in its power.” The organization offers grants for explorations around the globe and continues to recognize intrepid explorers, who have obtained significant knowledge in difficult conditions.

The Explorers Club, said Carmichael, “represents a community that recognizes the value of putting yourself in physically difficult/challenging situations not for thrill-seeking or fame but for advancing scientific knowledge. People don’t always appreciate the importance of field observations and fieldwork; not all systems can be duplicated under laboratory conditions.” 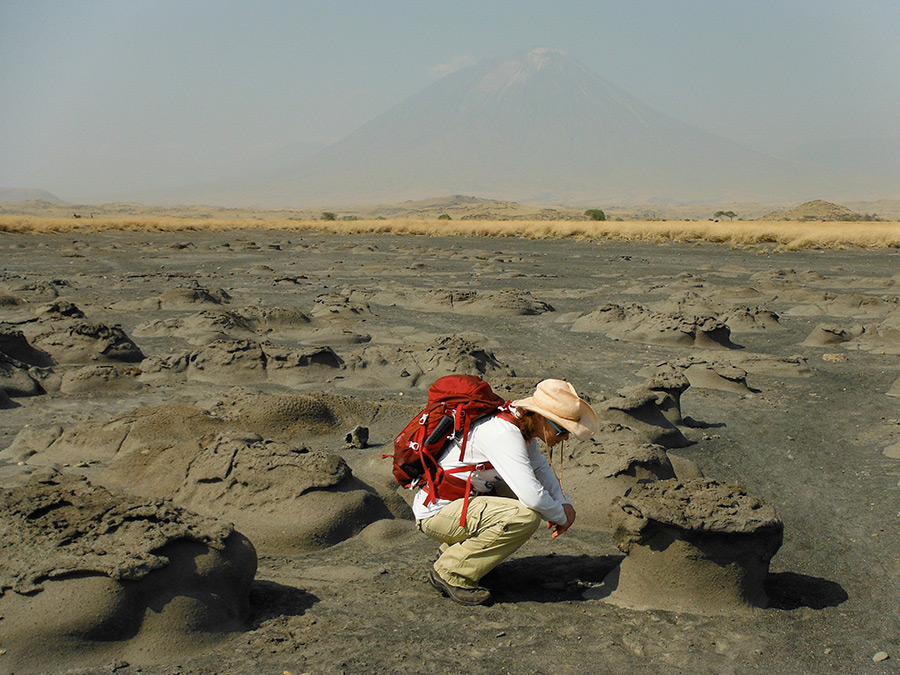 Carmichael looks at mud mounds in the Engare Sero river channel to determine the role of water in sediment deposition at the Engare Sero hominid footprint site, Lake Natron, Tanzania. Oldoinyo Lengai volcano, the source of the mud, is in the background. Photo by Cynthia Liutkus-Pierce

Interestingly, as a child, Carmichael had no interest in science. “I wanted to be a concert pianist,” she remarked, “but in high school that changed.” Growing up on the coast of New Hampshire, her high school chemistry teacher started an afterschool group to test water quality in a local estuary and in feeder streams. What she enjoyed was being outdoors doing science and planned to be an environmental microbiologist. In college her focus shifted away from biology. It happened unexpectedly through a chance happening. “There were no seats available in a microbiology course I wanted, so I took a course in oceanography instead,” she said.

Through the course of Carmichael’s dissertation research at Johns Hopkins University, her field of expertise narrowed to water coming from hydrothermal vents in the ocean, which passes through molten rock on its journey to the sea floor. She studies specifically how both the water and the rock are changed through chemical processes.

Carmichael’s appreciation of exploration became even greater when she was contacted by Karen Von Damm, oceanographer at the University of New Hampshire, who wanted to collaborate with Carmichael on a post-doctoral project about the plumbing of hydrothermal vents. During this work, Carmichael was invited to join research cruises with a number of renowned scientists, mostly from the Woods Hole Oceanographic Institution in Falmouth, Massachusetts. She was impressed by their humility and willingness to say that they did not always know how to explain what they were observing; they didn’t claim to have all the answers. These explorers/researchers also recognized the value of interdisciplinary work, where different fields of study must intersect and be considered in tandem in order to achieve greater understanding.

Following from this appreciation of interdisciplinary research, Carmichael is now involved in research with Dr. Suzanna Bräuer, microbiologist and faculty member in Appalachian’s Department of Biology. They are collaborating on research in the caves of southern Appalachia in northeastern Tennessee and southwest Virginia, which brings us back to the dark coating on the milky coarse rock.

Minerology and microbiology intersect in the work by Carmichael and Bräuer. Microbrial secretions on rock can dissolve the rock, which in turn provides nutrients for the microbes. The dark coating on the lighter colored stone is actually manganese oxide, a mineral created through the interaction of microbrial secretions and the rock’s surface. Due to the ability of bacteria and fungi to make sponge-like manganese oxide minerals that filter heavy metals from water, Carmichael and Bräuer saw the possibility of an outstanding practical application for their research. According to Carmichael, “We are trying to learn exactly how and why the microbes are forming these minerals, and also how we can artificially stimulate the microbes to make lots and lots of these minerals in order to hopefully make inexpensive water filtration systems.”

So the cave explorations continue for Carmichael, who said of her work and of The Explorers Club to which she will be inducted, “I’m rarely in a lab while silently mixing chemicals. It’s far more common to see me in waders or a cave helmet, weighed down with sampling gear, absolutely covered in mud or dirt, and spewing streams of profanity. The Explorers Club is a place where that kind of scientific inquiry is appreciated.”